One could wish to live as long and as fruitful a life as Jane (Pierce) Gregory. She was 95 years old, and one of the “oldest residents of Vinton County,” when she died on 30 Mar 1942.1 She died just a few years before the birth of her great-grandson (my father) in 1944, and yet she was born 17 years before the Civil War. 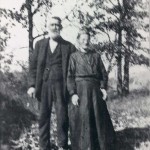 “Mrs. Jane Pierce Gregory, age 95, one of the oldest residents of Vinton County died Monday afternoon at the home of her son, Melvin, near Dundas, of complications. Mrs. Gregory was born April 10, 1848, in what is now Vinton County. Her husband, Arnold, died in 1930 at the age of 90 years. She was the mother of twelve children, seven of whom survive as follows: Arch Gregory, McArthur; Mrs. Nevada Verigan, Springfield; Mrs. Loberta Cline, New Marshfield; Melvin Gregory, Dundas; Mrs. Rose Sutphin, McArthur; Mrs. Charity Knox, Gheer’s Mill, and Calvin Gregory, Allensville. Funeral services will be held today (Wednesday) at pm at the Radcliff U.B. Church, with burial in Radcliff cemetery by the Tinker Funeral Service.”2

These two records of Jane (Pierce) Gregory’s death are a good illustration of how records can disagree over some particular detail. When comparing information in her death certificate and obituary, there is a discrepancy regarding her year of birth. Jane’s obituary reports 10 Apr 1848 as her birth date, whereas her death certificate states it was 10 Apr 1846. There were no state or county birth records kept for Vinton County or Ohio in this time period.

Census records indicate that Jane’s correct birth year is likely closer to 1848. Jane was 2 years old at the time of the 1850 U.S. Federal Census, when she was living with her parents and would clearly be identifiable as a “toddler.”3 In the 1860 census,4 Jane was 12 years old, which, again, places her birth year at about 1848. To underscore the consistency and likelihood of 1848 as the correct year of Jane (Pierce) Gregory’s birth, the 1900 U.S. Federal Census specifically lists “April 1848,” as the year of her birth.5

In an upcoming post, we’ll learn more about Jane (Pierce) Gregory’s marriage to Arnold Gregory, as well as the identities of her 12 children.